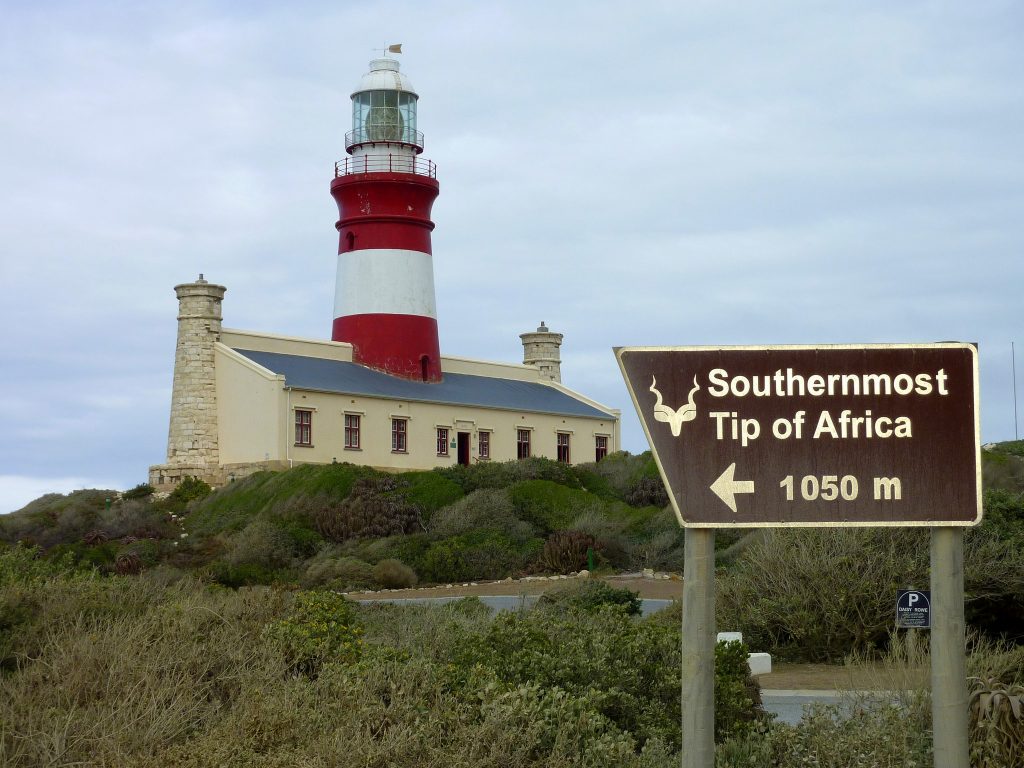 This lowly situated rocky shore extending about 150m into the sea, south-east of the Cape Agulhas Lighthouse, was considered to be the most southern point in 1836 until the 1980’s. The community planned to build a stone cairn at this point and the then State President, PW Botha, officially inaugurated the spot on August 23, 1986. But was this the actual Southernmost Tip? The National Monuments Council, Directorate Trig Survey and the Hydrographic Office were called in to survey the area. It was found that geographically, the southernmost point of Africa was, in fact, one kilometre further to the west.

Locally people called this site Die Punt and it took some time to get used to the new southernmost point. The Dutch barque, Juno, sank directly in line with the Historical Southern Tip on Wednesday afternoon March 3, 1852, in dense fog. Two women and two children drowned while lowering the lifeboats. The entire vessel broke up within two days. One of the survivors, a Belgian by the name of Johannes Lambertus Lambinon, tried to save one of the women by holding on to her dress. Unfortunately, when he reached land he only had a piece of black material in his hand. This piece of material is kept in the Bredasdorp Shipwreck
Museum. (SOURCE: Shipping Register, Cape Archives, C.C. 2/17; TURNER, Southern Lights.)

The small convoy of the Portuguese explorer, Bartolomeu Dias, was the first to sail around the tip of Africa, from west to east and back again. The significance of rounding Africa’s most southern tip was the discovery of a sea passage to the East that would make it possible to trade directly with India and Asia. Portuguese cargo ships were soon to round Cape Agulhas transporting hordes of silver and gold to the East, and returning with vast Eastern treasures. Unfortunately, not all made this dangerous trip safely. It is recorded that over 100 ships were lost on this passage to the East between 1550 and 1650. No fewer than 14 Portuguese East Indiaman came to grief along the east coast of South Africa. (To be continued) On April 23,

1488, St George’s Day, Bartolomeu Dias anchored at Aguada de São Jorge – at present known as Struisbaai. He stayed for three weeks, perhaps to replenish supplies and repairing ships before proceeding south-west. (SOURCE: Lantern, Jan 1988, p. 26). On May 16 he passed a certain flat
piece of land. He named it after an Irish monk, St Brendan, whose festival day it was: ‘Ponte de Sao Brendao’. This flat piece of land was the southernmost tip of Africa, seen for the first time by Europeans.